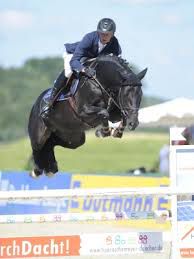 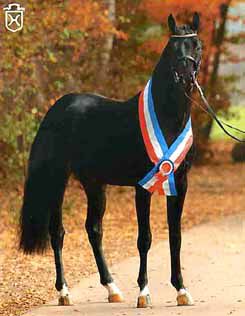 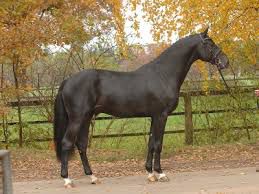 Founder of a new line for international show jumping breeding

This is a truly top class stallion in all respects: His abilities seem endless - effortless, quick and superior. Diarado was champion at the licensing in Holstein in 2007 and champion at the stallion performance test in Schlieckau in 2008. He impresses with exemplary ease at the jump, with superior scope and a willingness to perform that is second to none. He can turn as quickly as a cat and is equipped with a high intelligence, two attributes for the technical courses of today. In the 70-day test he achieved dream marks: 10,0 for free jumping, 9,5 for cross country canter ability and rideability, 9,75 for jumping the course and 9,3 for jumping ability. So this is a stallion for all disciplines.

Diarado won several times in Springpferdepr?fungen, in 2010 he won the qualifier at the Bundeschampionship with a mark of 9,3 and in the finals he won the Bronze medal (with twice a mark of 9,0). To date, he has regularly been highly placed at advanced level/S. With Jonas Vervoort he came third in the Grand Prix (S***) at the traditional Dobrock competition. In 2013, Diarado was number 1 of the FN show jumping breeding value estimation. In 2014, he was in the top group.

From the first crops of foals, 27 sons were licensed in Germany, amongst them numerous premium sires, like Eldorado de Hus in Westphalia in 2011, who was sold to France for 165.000 Euro, and also the stallion performance test champion Diacontinus and the sought after Holstein stud book sire Dinken. The Oldenburg stallion days in 2013 in Vechta were a Diarado festival:

The son De Quidam was champion stallion of the OS-collection and sold for 115.000 Euro to Westphalia. Diarado's Boy was the top price at 450.000 Euros at the AOS- auction and proclaimed 1a main premium winner. Year after year, he delivers much sought after foals, strong in conformation and movement, to many auctions. The daughter Jurwina was OS-champion mare at Schlosspark Rastede. Progeny from the first three crops of foals were winning numerous Reitpferde-, Eignungs- und Springpferdeprufungen, (competitions for young horses, dressage and show jumping)

His sire Diamant de Semilly is one of the best show jumping sires world-wide. He is also sire to the champion stallion of the OS licensing 2011, Dicapo, as well as other licensed sons who currently receive much attention. He won the team Gold Medal with Eric Levallois at the World Equestrian Games 2002 and a year later, the team Silver Medal at the European Championships. He was awarded the title 'Best Sire of Young Horses' in France a number of times. In 2014 he was ranked third in the WBFSH world ranking list of the best show jumping sires. Combined in his dam's pedigree are Corrado I, Contender, Lord and Ramiro, four absolutely top sires in one line. Corrado I, internationally successful with Franke Sloothaak, alone has a progeny lifetime earnings sum of 3,28 million Euros. Contender's record is at 8,65 million. Diarado stems from the Holstein dam line 318 d 2, from which come more than 50 licensed stallions, among them Corofino I and II, Coriano, Crawford, Chello I-III, the licensing champion Camiros and a multitude of international sport horses.