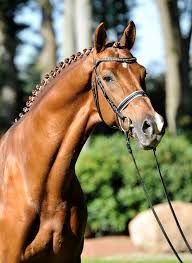 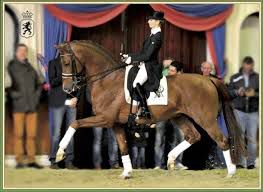 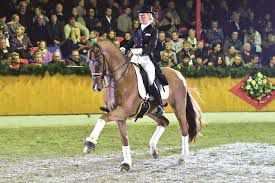 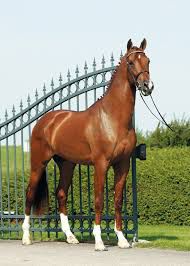 Important dressage sire with phenomenal charisma
A stallion that mesmerises throughout Europe and his fan base is growing with every appearance: Strong in type, Vivaldi impresses under saddle with radiance and incredible movement. He was reserve champion of his stallion performance test and in 2007 he won the Pavo-Cup of five-year-old dressage horses with Hans Peter Minderhoud/NED. In 2008 and 2009, he added triumphs in the KNHS/KWPN stallion series achieving marks of 10.0 for his trot. Vivaldi is trained to advanced level. As a producer, he is now recognised globally: So far, in Germany alone 19 of his sons have now been licensed, amongst them several highly-priced premium stallions. With a successful contingent, Vivaldi enriched the World Championships of young dressage horses in Verden in 2014 and also in 2015, where his son Eye Catcher won the Bronze Medal of the six-year-olds. In 2015 and 2016, his son Fenix won the five and six-year-old Pavo-Cup in the Netherlands. The Pavo-Cup of six-year-olds was a real festival for Vivaldi in 2016, when behind Fenix, in second and third place, were First Apple and Fantastique, both Vivaldi progeny. Vivaldi also produced several mare winners at shows and in 2016, he was once again third best stallion of the FN dressage breeding valuation throughout Germany (169 points!).
His sire Krack C was champion of the Pavo Cup dressage in 1996 and 1997. On the occasion of the stallion performance test in Ermelo he achieved very high marks for his rideability. Krack C won Grand Prix, ridden by Anky van Grunsven and participated in the World Equestrian Games in Jerez in 2002. Dam sire Jazz is winner of international Grand Prix and was part of the Dutch dressage team with Tineke Bartels on numerous occasions, including the World Equestrian Games in Jerez. In 2002, Jazz was awarded with the predicate "keur" for his breeding performance. Later on, he continued his career in dressage arenas with Kirsten Beckers/NED, and in 2006, he was honoured as the KWPN Horse of the Year in the Netherlands and was awarded the title "preferent". In 2008, he led the WBFSH dressage-ranking list for the first time. Grand sire Cocktail, ridden by Anky van Grunsven/NED was internationally successful in dressage sport
Via Purioso, Cocktail´s pedigree goes back to the foundation stallion Furioso II, which was, via his sons Purioso and Voltaire, very prevalent and permanently successful in the Netherlands. Vivaldi stems from the Dutch dam line 002, a line of international popularity, from which come the stallions What's in a Name, Lurioso, Modjo, Paroschka (all privately owned stallions, NL), Norman (privately owned stallion, Rhld., Brdbg.) and Rajko (privately owned stallion, NL, Thür.), Arko III (privately owned stallion, Oldbg., internationally successful with Nick Skelton/GBR), Blue Velvet N (privately owned stallion, Rhld.), Rincon Zeus (ARG) and the internationally successful three-day-event horse Bordou (by Bouquet AA) Peter Thomsen. The world-class producer Darco (PB/privately owned stallion, BEL, internationally successful with Ludo Philippaerts) belongs to this lineage too.