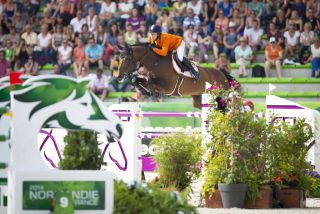 VDL Groep Verdi TN N.O.P. is the best example of sport and breeding going hand in hand. For years, Verdi combines his career as a sire with a sports career at the very highest level. Last year, Verdi and his rider Maikel van der Vleuten competed at their fifth major championship in a row (!): European Championships in Madrid 2011, Olympic Games in London 2012, European Championships in Herning 2013, World Equestrian Games in Caen 2014 and European Championship in Aachen 2015. In addition, Verdi took part in no less than three World Cup Finals, in which he finished twice as 6th and once as 7th! With Olympic team silver, team gold at the WEG and European team gold in his pocket, the 14-year-old Verdi seems to be on the right track for the Olympic Games in Rio de Janeiro in 2016.

Besides his own performances, Verdi’s pedigree is also outstanding. Sire Quidam de Revel is one of the most influential sires of the past decades and the same goes for Verdi’s legendary grandsire Landgraf I. Verdi was bred out of the famous Holsteiner damline 747a, which also produced Calato, VDL Bubalu, Vingino and many more world-class showjumpers and stallions.

It does not come as a surprise that Verdi is developing into a true foundation sire himself. From his first crops of offspring, one after another jumps at Grand Prix level and although his oldest progeny is only 10 years old, over 80 offspring by Verdi jump at 1.40m level or higher! In addition, his sons Farmgraaf and First Verdi were approved by the KWPN and Verdi produced numerous champions at KWPN Mare Shows.