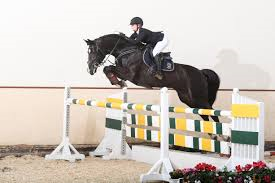 A large, talented and type son of Balou du Rouet, the stallion that has for years filled international show-jumping arenas around the world with successful show-jumpers. Baloutaire PS presents himself extremely well and impresses with supple and uphill paces. His jumping abilities are absolutely amazing, with huge abilities, and impeccable technique and bascule.

His pedigree brings together the world’s elite of show-jumping horses: His sire Balou du Rouet has held his ground for years amongst the Top Ten of the WBFSH world ranking, and his dam sire Chacco-Blue led this ranking for the first time in 2017. In the third generation follows Voltaire, who was equally successful internationally with Jos Lansink and Emile Hendrix. Thanks to the success in sport of his numerous offspring, he also counts among the best sires of the world. This was also the case for Quidam de Revel in the fourth generation, who was team bronze medalist and fourth individually at the Olympic Games in Barcelona in 1992 with Hervé Godignon (FRA). From 1993, he was victorious with Thomas Velin (DEN), including in Grand-Prix classes in Hanover and Arhus (DEN) and he set breeding standards like few stallions before him.

Baloutaire PS stems from the French mare family 94, which produced a whole string of successful sires for the Selle Français breeding such as Belphegor IV, Fair Play III, Lyndon and Veneur du Prêlet and also may successful show-jumpers up to international level, above all Nino des Buissonets, Olympic champion 2012 in London with Steve Guerdat (SUI).