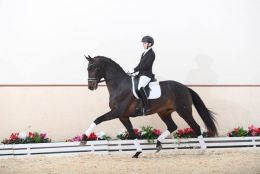 Big-framed and important, radiantly beautiful and with lots of presence at all times, this dark bay youngster shows exceptional paces. His sire Fürstenball, an amazing hero, mastered his international break-through at an early age. As champion of his licensing, German national champion and winner at S level dressage, he has since then produced many licensed sons and champions of Germany. His dam Thery (FN name: Toto Chanel) was also successful in dressage. Dam sire Totilas was double European Champion in Windsor in 2009, World Champion in Lexington in 2010 and set many world records. On the breeding front, from his first crops of foals, he has already produced many licensed stallions, highly placed finalists at the German championships, the winner of the Pavo Cup and placed finalists at the World Championships for young dressage horses in Verden and Ermelo. The famous half-blood Londonderry in the third generation was champion of his licensing in 1994, German champion in 1999, “Hanoverian Stallion of the Year” in 2013 and has had a special influence on the Hanoverian breeding of sport horses during the last few years. He also produced German champions and 85 dressage horses successful at S level. Great-grand-dam Sunny Girl is full-sister to the sire who was successful at S level Sunny Boy and dam of the licensed stallion Lord Schufro. Her grand-dam Fiesta is the dam of the very famous and highly demanded stallion Don Schufro. With Sandro Hit, Donnerhall, Pik Bube I and Unkenruf/T., high-calibre equine names also appear in the earlier generations.

Fürst Toto: our big hope for breeding and sport