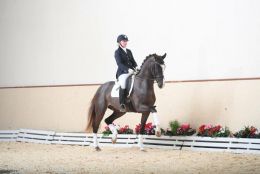 The legendary Oldenburg dressage hero Donnerhall appears three times in the pedigree. Visually, this exceptional young stallion is undoubtedly in Donnerhall’s image. Sezuan's Donnerhall is an elegant liver chestnut easily recognizable from the Donnerhall line. Large and important with a lot of harmony in the body, his paces show outstanding potential and he impresses with first-class rideability values. His temperament is exemplary; he is naturally calm with a first class character.

His sire Sezuan was World Champion of the five, six and seven-year-old dressage horses and belongs without a doubt, to the most demanded dressage stallions of the present. Not only his breeding career, but also his sport career are marked with highlights. Already at his stallion performance test, he achieved a record score of ten times the score of 10.0. During his performances at the World Championships, he was awarded marks exclusively between 9.5 and 10.0 for his paces. From Sezuan’s first crops of foals appear many top prices and also his first licensed stallions, including the Oldenburg premium stallion Sam and the Vice Champion of Germany, Secret.

The dam sire Sir Donnerhall I has already earned the status of "trademark stallion". Himself second Reserve champion of his licensing, regional champion, record winner of his stallion performance test, Vice world champion of dressage horses and German national champion and winner of the dressage emphasized main premium, he can refer to over 100 licensed sons. Numerous auction top prices are to his credit. In the third generation is Don Schufro, Danish Champion and Team bronze winner at the Olympic Games in Hong Kong in 2008 with Andreas Helgstrand/DEN, as well as sire of numerous champions. His grand-dam Dubiola produced two licensed stallions with Sandro Hit, including San Schufro, victorious at S level with Kristin Biermann. With Rubinstein I, Furioso II and Miracolo xx the performance genes are highly secured in the previous generations. (Name NN) represents the Oldenburg line 104/Gula (by Kimme-Diedrich). From this Heidemei line come eleven licensed stallions, including Almati (privately owned Rhpfs.), Uruguay (privately owned Oldbg.) and Quick Star IV (SUI), as well as the champion of the Oldenburg Elite Mare Show 1980, Fichu (by Furioso II) and the internationally successful show-jumper Wichenstein/ Florian Meyer zu Hartum.