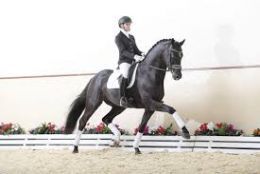 Zenon combines an excellent type, a lot of elevation, correct foundations and three first-class paces. Zenon confirmed this high estimation during his 50-day test in Adelheidsdorf in autumn 2017, where he finished third overall out of 26 candidates with a final mark of 8.66. He scored over 8.5 for almost all criteria. His sire Zonik, by Zack-Romanov-Don Schufro, bred in Denmark, counts as one of the best dressage sires of the world and is currently prepared by Edward Gal for the international arenas. Dam sire Don Schufro, present twice in the pedigree, led the FN dressage breeding valuation for years and started his career here in Mühlen. With Andreas Helgstrand, he was internationally victorious up to Grand-Prix and in 2008 he won the bronze medal in Hong Kong with the Danish Team. His grand-dam is the full-sister of the licensed stallion L’Acteur. His great-grand-sire Lorentin I qualified for the German dressage championships in 1998. Later on, he was successful up to Grand-Prix level with Wolfgang Schade. In 1999, he set a milestone in his career by producing the champion of the Holstein licensing, Lusello. In total, 10 of his sons were licensed and 19 of his daughters were awarded the State Premium.