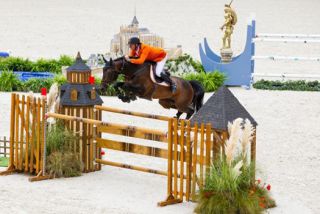 Sire Baloubet du Rouet was not only Olympic Champion and won the World Cup Finals three times but his offspring also perform easily at the Grand Prix level.

Bubalu jumped for years at the highest level with Jur Vrieling. 2014 was his final international sport season with those results crowning his many achievements. With the Dutch squad Bubalu was World Champion in Normandy and Jur’s and Bubalu’s performance was decisive for the gold medal. Bubalu also won the Furusiyya Nations Cup Final in Barcelona with the Dutch team, jumping two exhilarating clear rounds. Bubalu has many highlights in his career, such as team silver at the Olympic Games in London 2012 and becoming Dutch Champion in 2012. With the Dutch show jumping team he won the Nations Cup in Aachen, Dublin and Sankt Gallen. Bubalu jumped 24 Nations Cups in his life with a total of 25 clear rounds. Individually he won the Grand Prix of Drammen and Treffen.

Daughter Huwerna was honored as National Foal Champion in Ermelo in 2012 and became Champion of the Central Mare Show in Zeeland as a 3-year-old. Daughter Honeypenny W, Champion of the Central Mare Show of Friesland, finished 3rd in the final of the National Mare Championships. Afterwards she scored 81.5 points in the IBOP-test. Bubalu daughter Heibe got 82 points for her IBOP-test, and in Ireland Kassidy became National Foal Champion.

If the mare is not in foal before the 1st of October, we need an official and signed veterinarian statement stating the mare is not in foal. With this statement you can continue breeding for 50% of the stud fee in the following season.
Copyright © 2020 B & W Equine Vets  |  All Rights Reserved
Equine Hospital
Breadstone
Berkeley
Gloucestershire
GL13 9HG