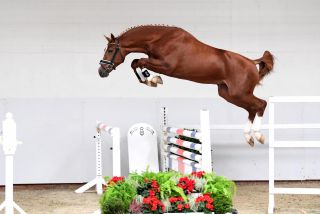 Just 3-years old, Quickthago combines world’s best showjumping bloodlines for his future in sport. Sire, Quickly de Kreisker, has been one of world’s most successful show jumpers, ridden by Abdelkebir Ouaddar, and was even in the number one spot of the FEI World Ranking. Quickly’s sire Diamant de Semilly lead the WBFSH Sire Ranking for many years and still is one of world’s leading sires. With offspring such as Don VHP Z, Inca Boy of ‘t Vianahof and Emerald, Diamant de Semilly still is among the best. Quickthago VDL’s dam’s sire is the ‘Preferent’ awarded stallion Numero Uno, who is the sire of many international show jumpers. As a dam’s sire, Numero Uno seems to be making his mark too. His carefulness, mentality and reflexes characterize both his children and his grandchildren. Then the pedigree of Quickthago goes back to the famous stallions Capitol I and Calando I.

Quickthago earned his breeding license at the Oldenburger Stallion Show and at the Holsteiner Verband. He stood out with his light-footedness, reflexes and jumping technique. Additionally, this interestingly bred young stallion showed lots of athletic scope.

If the mare is not in foal before the 1st of October, we need an official and signed veterinarian statement stating the mare is not in foal. With this statement you can continue breeding for 50% of the stud fee in the following season.
Copyright © 2020 B & W Equine Vets  |  All Rights Reserved
Equine Hospital
Breadstone
Berkeley
Gloucestershire
GL13 9HG