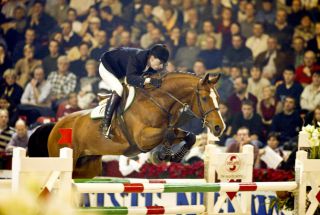 His full brother Action Breaker was 11th at the WEG in Kentucky and placed 3rd in the Aachen Grand Prix.

Offspring of Quasimodo van de Molendreef are successful in sport. The best known is Hello Sanctos, who, ridden by Scott Brash, held the #1 position in world show jumper rankings. Hello Sanctos wrote history by winning the Rolex Grand Slam. Thanks to his consecutive victories in the Grand Prix competitions of Geneva, Aachen and Spruce Meadows, Hello Sanctos earned the 1 million euro Grand Slam bonus. In addition, Hello Sanctos was two-time victor in the Global Champions Tour; won team gold at the Olympic Games in London 2012; Team Gold and Individual Bronze in the European Championships in Herning 2013. Those were the toppings on the cakes of countless major Grand Prix competition wins.

Other offspring are not in the shadows. Ridden by Alexander Onishenko, Comte d’Arsouilles attended the Olympic Games in London 2012. The pair also won the Nations Cups at Drammen and Linz. Dauphin de Muze was successful in the United States, placing 2nd in the Grand Prix of Los Angeles and 10th in the World Cup at Thermal. Colore placed 9th in the GP Lier. El Santo placed 8th in the GP Rio de Janeiro. Gloria van de Barlebuis won multiple international classes - among them the GP Villers Vicomte Breteuil and the GP Hardelot. Gracile won the final of the 6-year olds in Mechelen. Others competing at international level are: Daiquiri van de Moortelshoeve, Duc d’Arsouilles, Emorkus RE, Flying Dutchman, Jewel’s Carat, Bellano van de Bosbeek, Heartbreaker, Zidane and RMF Valiente.

At the mare and foal shows, his offspring also perform well: LO Sanctos van de Suydersee placed 9th in the final of the National Foal Championship and also was Champion of the provincial foal show.

Daughter Fifa Paoloa sold for €?65.000 at the Jumping Talent Sale and Quasi Shura was sold for
€ 16.000 as a foal and was the most expensive show jumping foal at the Elite Foal Auction of Vechta in 2014.

If the mare is not in foal before the 1st of October, we need an official and signed veterinarian statement stating the mare is not in foal. With this statement you can continue breeding for 50% of the stud fee in the following season.
Copyright © 2021 B & W Equine Vets  |  All Rights Reserved
Equine Hospital
Breadstone
Berkeley
Gloucestershire
GL13 9HG