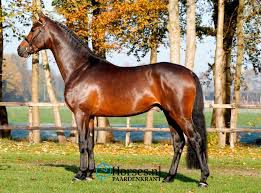 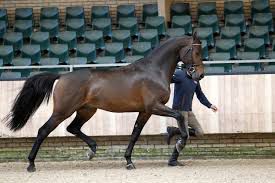 Cantona TN is one of the new jumping stars at Team Nijhof. This son of the world-class show jumper Codex One was a true eye catcher at the national shows as a 4-years-old and he has been approved by the KWPN with a score of 84.5 points. Cantona TN gained a 9 for ride ability, while his canter, reflexes, scope, attitude and talent as a showjumper were judged with an 8.5. His talent combined with his exceptional pedigree, Cantona TN seems to be a highly interesting new stallion at the stud.

Sire Codex One, ridden by Christian Ahlmann, is among the very best of his generation; the Contendro I-son won the World Cup of Stuttgart, the Grand Prix-competitions of Valkenswaard, Berlin, Hamburg, Neumünster, Basel and above all the Rolex Grand Prix of Aachen in 2014. In addition, he participated at the London Olympics, the European Championships in Herning and the World Equestrian Games in Caen.
Cantona TN is a son of the Caretano-daughter Claudia Z, who already produced another two approved stallions. Claudia’s dam is the famous mare Larthago. This daughter of Carthago successfully jumped at 1.50m with Matthijs van Asten and is nowadays known as one of the best broodmares of Europe. Larthago produced no less than five approved stallions: the 1.50m-showjumper Cevin Z, the 8-years-old 1.45m-jumper Dimitri Z (Kim Kristensen), the 6-years-old exceptionally talented Casago (Piergiorgio Bucci), Casago II and the famous Harley VDL, who performed at 1.55m-level with Jessica Kürten. In addition, several offspring of Larthago jump at international level: the 8-years-old Einstein at 1.45m level, Hopes are High Z at Grand Prix-level with Ruben Romp, Katharina Offel and Cara Raether, the 9-years-old Soren Z at 1.60m-level with Kasey Ament, Heartbreaker-son Uncle Sam at 1.45m-level with Koen Leemans and Bruce Z at 1.40m-level with Day Keymolen.
Cantona TN has been approved by both the KWPN and Studbook Zangersheide and he seems to have all the qualities to match the performances of his highly successful relatives. He was the reserve champion of the KWPN performance test in 2017.