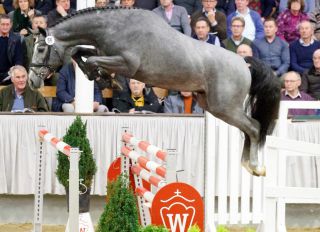 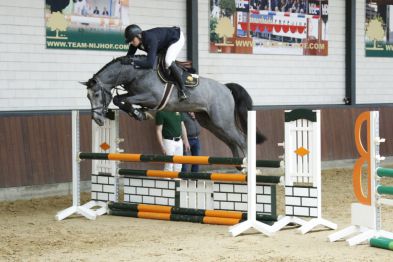 Classico TN is highly talented son of the world-famous sire Cornet Obolensky out of a Selle Français damline. At the Selle Français-stallion show, Classico TN showed off his exceptional jumping technique and reflexes. At the Westphalian stallion show he again caught the eye of many and gained his breeding license.

Sire Cornet Obolensky hardly needs any further explanation; ridden by Marco Kutscher, the son of Clinton x Heartbreaker jumped at the highest level and already from his first breeding years, a great number of offspring performed at Grand Prix level. Offspring such as Cornetto K (Alberto Zorzi), Clooney (Martin Fuchs), Cornet d’Amour (Daniel Deusser) and Coree (Gregory Wathelet) are without a doubt among world’s best horses of this moment. Frou Frou’s pedigree goes back to the top sire Burggraaf, who is still of great influence today. Later on, Classico TN’s pedigree carries the genes of the Papillon Rouge-son Diamant Rouge II.

Classico TN has a textbook jumping technique, excellent reflexes and lots of scope. This Westphalian approved stallion seems to have a bright future ahead of him.