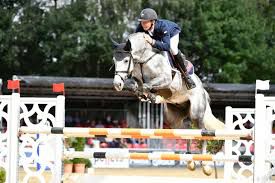 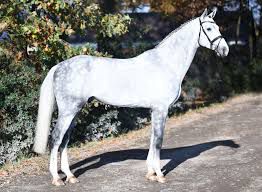 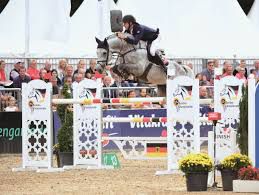 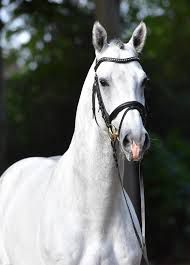 Until now, Diaron OLD's sport career has been the main priority. It is therefore even more remarkable that Diaron produced our recently licensed premium stallion Diablue PS from his first crop of foals. Diaron is also in the fast lane on the sporting parquet, with victories and placings with Patrick Stühlmeyer in the Youngster Tours of Verden, Neumünster, Zandhoven/BEL and Opglabbeek/BEL. And he almost succeeded in winning a third title at the German Championships. Placed second in the qualifier, he accessed the final of the Warendorf Championships for seven-year-olds, but had to settle for eighth place due to the only fault of all his rounds there. In the 40-year history of the German Championships for young show-jumping horses, Diaron OLD has nevertheless secured the record of a stallion winning double gold, which has only ever been achieved twice. After winning the five-year-old class in 2017, the modern show-jumper also won the title in the six-year-olds in 2018. After a second place in 2017, Diaron also won the Oldenburg Show Jumping Championships in Rastede and was named VTV Show Jumping Stallion of the Year at the Oldenburg Stallion Days. Furthermore, he received the OLD designation, which is awarded by the Oldenburg Verband to the best Oldenburg bred horses.

Diaron is taller than his sire Diarado, and an elegant stallion with superb technique. He also gives that extra bit of blood.

With Diarado, Come on, Aldatus and Domino, four generations of stallions from the Schockemöhle stud follow directly, one after the other, in Diaron’s pedigree. His sire Diarado was Champion Stallion of the Holstein licensing, record winner of his stallion performance test, victorious in young horse classes, bronze medallist at the German Championships (two times 9.0) and came third in the Grand Prix in Dobrock. His oldest offspring, like Don Diarado/Maurice Tebbel, team third at the World Championships, have established themselves at championships.

The dam Lenda-Cara also produced Campitello (by Concetto Famos)/Alexander Hinz, who was placed third in the Grand Prix in Frankfurt, Verden, München as well as the Stuttgart German Masters.

1500 euros + vat for unlimited attempts within one breeding season. If your mare is confirmed not in foal by 1st Oct then you will be entitled to a 50% credit for the following season for the Schockemoehle Stud. If your first order was after 1st July then you will be entitled to a 100% credit. When choosing a stallion from the Schockemoehle Stud we strongly reccommend that you have a second choice Schockemoehle stallion as well because in the busy season mares in Germany take priority and your first choice may not be available.
Copyright © 2021 B & W Equine Vets  |  All Rights Reserved
Equine Hospital
Breadstone
Berkeley
Gloucestershire
GL13 9HG