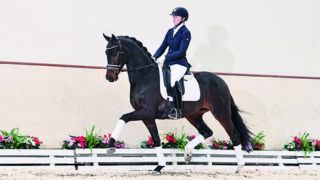 Stallion performance test reserve champion and bronze medalist at the Oldenburg Regional Championships, Don Romance PS has done everything right during his first season under saddle. We didn't expect anything less from this charismatic up-and-coming star, as he is the result of the dream genetic combination of Dante Weltino and our exceptional broodmare Gesina. He was awarded scores of 9.0 for his canter, walk, rideability, general impression and character at his 50-day test in Scklieckau.

His sire Dante Weltino OLD extended his medal collection in 2019 with team bronze at the European Championships in Rotterdam/NED and also took part in the individual final. Previously, the 1st Oldenburg Reserve Champion ridden by Therese Nilshagen/SWE had already won team bronze at the European Championships in Gothenburg/SWE in 2017 and took fourth and fifth place in the individual competition. At the 2018 World Equestrian Games in Tryon/USA, he came fourth with the Swedish team and tenth in the individual competition. Dante Weltino started his career in five and six-year-old classes with serial victories and qualifications for the German Championships for young dressage horses. In 2014, in his first competition season at advanced level, he won 13 times and was placed in the final of the Nuremberg Burg Cup. At the age of eight in 2015, he successfully made his Grand Prix debut, finished fifth in the Frankfurt Louisdor Prize Final and was named VTV Dressage Stallion of the Year in Oldenburg. In 2016, he was selected by Sweden for the Olympic Games in Rio de Janeiro/BRA. Amongst his 20 licensed sons are Dante Quando OLD, Champion of his stallion performance test and German and Regional Champion, and Dante’s Stern, German Sport Horse Champion Stallion and fourth at the Championships of South Germany. Dante Weltino's sporting offspring, including the Vice German and Westphalian Champion, Dark Diamond HM, the Southern German Champion, Darling Harbour, and the Swedish Champion, Davalerian, dominate the competitions for young horses.

Through the dam sires Sir Donnerhall I and Don Schufro, there are interesting inbreeds to the sire of the century Donnerhall and the no less significant half-blood Sandro in the previous generations of Don Romance PS’ pedigree.

The famous stallion Voltaire also descends from this bloodline.

Don Romance PS: another elite descendant from the Gesine line