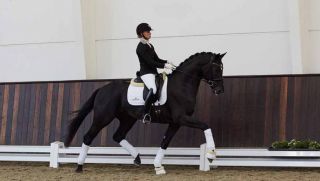 A majestic performance at the Hanoverian licensing earned Bonjour a place in the premium ring. "Beautiful and charismatic. In movement this stallion, clearly marked by his sire Bon Coeur, always presented himself in an uphill frame and super elastic", Heike Kemmer summarised the enthusiastic judgement of the licensing commission. With his outstanding paces and exceptional ground-cover, this jet-black stallion sets new standards.

His sire Bon Coeur was premium stallion of the Hanoverian licensing in 2014. He finished his 30-day test in 2015 in Schlieckau with a dressage-focused end mark of 9.1. He completed his sport tests with scores of 9.0 and 8.9. As a three-year-old, he was Vice German Champion and Vice Regional Champion, as a four-year-old, he won the Hanoverian Regional Championship and was once again Vice German Champion. He won international competitions up to Inter I representing Sweden. He has produced around 25 licensed stallions, including the Oldenburg Champion Stallion Bellany and numerous premium stallions, such as Bon Courage, who was Vice German Champion of three-year-old stallions in 2019.

His dam St.Pr.St. Fenja has also produced his full brother, the licensed stallion Bonfire HW, premium stallion of the Hanoverian licensing in 2019.

His grand-sire Fürst Nymphenburg I, who stands at the Celle State Stud in Lower Saxony, was victorious in sport up to Inter II. He produced seven licensed stallions.

The proven sires Hochadel and Carbid appear in the third and fourth generations of his pedigree.