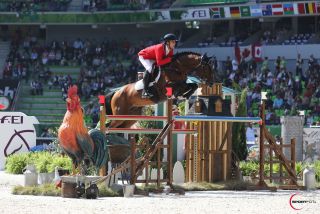 Hardrock Z is a fantastic bred son of Heartbreaker. Heartbreaker is one of the living legends in breeding of showjumpers. The Nimmerdor-son had a spectacular career in sport and developed in breeding as one of the greatest of all time, with sons like Harley VDL, Toulon, Quasimodo van de Molendreef, Padinus and many others. Just like the ‘Preferent’ awarded Harley VDL, Hardrock Z is a product of the successful combination Heartbreaker x Carthago.

Ridden by Venezuela’s Emanuel Andrade, Hardrock Z participated at the World Equestrian Games in Caen in 2014 and at the Olympic Games in Rio de Janeiro in 2016. He also participated in the Pan American Games in Toronto in 2015, where he finished 6th individually after taking the lead in the first qualifier.

Hardrock jumped successfully in numerous Grand Prix-competitions at top level, such as in Wellington, Tryon, Calgary, Miami, et cetera. In addition, Hardrock Z has fantastic reflexes, an excellent attitude and an outstanding rideability.

Hardrock Z: has got what it takes