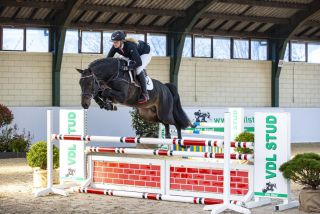 Bred by the VDL Stud, Landino made an excellent impression at both the KWPN and NRPS Stallion Show jumping with a lot of ease, light-footedness and athletic ability.
Known as one of the best breeding sons of the legendary Stakkato, sire Stakkato Gold has over thirty offspring competing at the international Grand Prix level. His offspring stand out due to their reflexes, technique and ability. Landino ’s grandsire is Cilton, a son of the legendary Calando I, was lightly used in breeding but has produced a number of striking jumping talents. Additionally, the pedigree of Landino consists of the legends Nimmerdor and Ladykiller xx.

Invited to for the KWPN performance test, Landino earned his breeding license at the NRPS. Like most Stakkato Gold offspring, Landino is a modern showjumper with the reflexes to be competitive and the ability to succeed at the highest level.

Landino : A son of Stakkato Gold out of one of world's leading damlines