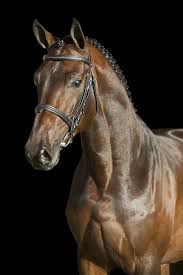 Pommerol de Muze brings together world’s best showjumping genes and was bred out of one of Belgium’s most famous damlines. Ridden by Harrie Smolders, sire Emerald has been one of the most successful showjumpers in the world for many years and was part of the Olympic team in Rio de Janeiro in 2016. In addition, Emerald won numerous CSI5* Grand Prixs and finished in second place in the World Cup Final. Although Emerald did not breed a great number of offspring in his first years, an impressive percentage jumps at international Grand Prix-level. Think of descendants like Igor (Jos Verlooy), Jeunesse van ‘t Paradijs (Lorenzo de Luca), Iluna (Ramiro Quintana), Imerald van ‘t Voorhof (Paul O'Shea), Jaguar vd Berghoeve (Matthew Sampson & Janika Sprunger), etcetera.

Pommerol’s grandsire Kannan has been in the top ranks of the WBFSH Sire Ranking for years and still produces new talents. Further on in Pommerol’s pedigree we find Taran de la Pomme - the son of Tolano van ‘t Riethof who was successful at the highest level with Kevin Staut. Taran de la Pomme is bred out of Ta Belle van Sombeke, so he is the half-brother to Glock’s London (Gerco Schröder) and Golden Hawk (Shane Breen). Then Pommerol’s pedigree goes back to the top stallions Darco, Nabab de Rêve and Chin Chin.