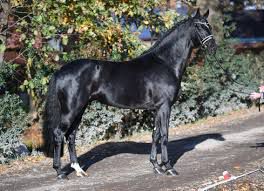 The dressage stallion Zenon is a son of the ‘new Totilas’ of Edward Gal- the upcoming prodigy - Glock’s Zonik. At the age of only 9, the Blue Hors Zack-son has already become Dutch Champion in Ermelo and finished his year successfully at London Olympia. In the Grand Prix, Edward Gal and highly talented Glock’s Zonik had the best go. In the Freestyle to Music they scored almost 80% to take 3rd place.

Zenon’s pedigree continues with the famous stallion Don Schufro, who ridden by Denmark’s Andreas Helgstrand won team bronze at the Olympic Games in Hong Kong in 2008. In breeding, Don Schufro is unquestionably one of the best sons of the legendary Donnerhall I. Great-grandsire Lorentin I is a dressage stallion with Holsteiner roots. Ridden by the German rider Hubertus Schmidt, Lorentin I also competed at Grand Prix level in dressage.

Zenon is a product of the breeding program of VDL Stud and has the mare l’Actrice as his grand dam. She is the full sister of the stallion l’Acteur, who was licensed for breeding in Sweden. Of special note this dam line has produced several international show jumpers and dressage horses.

Zenon himself earned his breeding license at the Hannoveran and Oldenburger Verband. He is especially recognized due to his functional and active way of moving.

Zenon passed his stallion test at Adelheidsdorf finishing in 3rd place with an average score of 8,66. He received a 9 for his gallop, type, character, attitude, rideability and total impression. For his walk and trot he received an 8,5.

His pedigree has three Grand Prix stallions in a row (B.H. Zack, Rousseau, Ferro) which bode very well for Zenon’s future in sport.

Zenon meets the PROK and DOC criteria of the KWPN.

Zenon: son of the exceptional Glock’s Zonik with a promising future in the sport