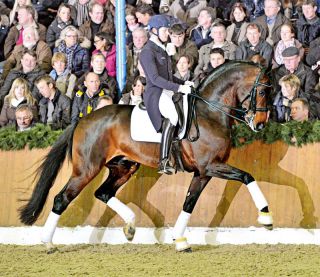 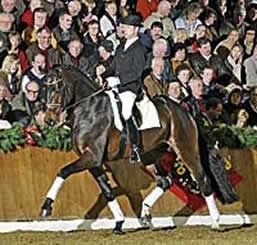 Champion stallion and champion mare in one go

Personality of a top sire and a magnetic effect throughout all of Europe. Large framed and in every aspect impressive, First Romancier stands for collection and a disposition fit for the highest dressage level. He was main premium champion and in 2009 the most successful stallion of his year at the World Championships of 5-year old dressage horses. At the Bundeschampionship he came second in the qualifiers for the final with a mark of 9,0. In the finals of the Bundeschampionship at and at the World Championships for dressage horses he was placed 4th.

He was awarded the highest marks of between 9,0 and 9,5 for rideability and the three paces at the stallion performance test. From a breeder´s perspective, he achieved something sensational: he sired the Oldenburg licensing champion stallion For Romance in 2011, who was sold for the grand sum of 750.000 Euro and in the summer of 2012, his full sister Fasine became champion mare at the Oldenburg Elite mare show in the Schlosspark of Rastede.

In 2011, he presented another premium sire: Fürstbischof, stud sire at Celle, which was sold for 170.000 Euro. The number of licensed sons has now grown to 23 and in 2013, For Romance was undisputed dressage main premium champion at the Oldenburg Stallion Days in Vechta. Repeatedly he has enriched the Bundeschampionship with strong progeny, among them the licensed Fusion and First Romance who were highly placed in the finals of four year old stallions. Prior to that, Fusion was Oldenburg vice champion. At sport horse auctions, Fürst Romancier is always part of the lot, for example, his son Fürst Pückler was top price in Vechta in 2014. His progeny are very successful in elementary/novice classes and have put Fürst Romancier yet again in the top 1% of all German dressage stallions, according to the FN breeding value estimation index, with 157 points. The sire Fürst Heinrich was dressage horse World Champion and in his short time at stud, producer of extraordinary horses, such as the dressage World Champion of 2011 Woodlanders Farouche, the Oldenburg champion stallions Fürstenball and Van the Man. Dam sire Romancier comes from the multi-successful Olympic dam line of Dodona. As a dam sire to significant sires (among them Don Romantic) he has perpetuated his name permanently in the annals of worldwide dressage breeding. Fürst Romancier is ambassador of the valuable original Oldenburg dam line of Edoste, from which come 13 licensed stallions, amongst them the champion of the Bundeschampionship and European Championship participant Exupéry, the vice Bundeschampion Landjuwel Gold, the Olympian Petit Prince/Ellen Bontje, the Grand Prix winner Avignon (with Thomas Schmitz German Champion) and the international winner at advanced level/S level Questa Vittoria/Thomas Kleis.