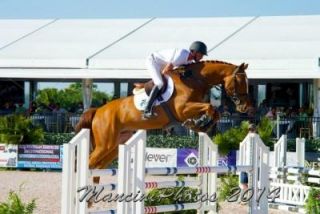 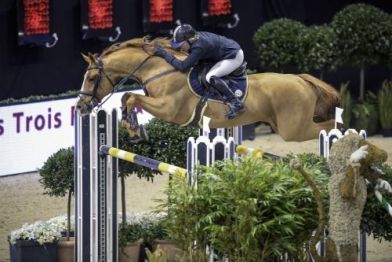 Arezzo’s sire line is unique with five generations of Grand Prix jumpers in a row: Chin Chin, Heartbreaker, Renville, Jasper and Akteur - and all are sires of Grand Prix jumpers. His dam line exemplifies performance. The most famous representatives are Dragonfly (Nicole Simpson) and Nacorde (Andre Thieme) - the latter winning the Hamburg Derby three times. Both horses are half-brothers to Arezzo’s dam, Sarjolijn ‘ster, prestatie’. As well as Arezzo she brought the international show jumper Zodermus and two 1.30m jumpers. As a three years old, Arezzo was Champion of the KWPN Spring Stallion Test receiving a 9 for his reflexes, scope and talent as jumper. With rider Jessica Kürten Arezzo impresses in the international arenas. Last year he won the Grand Prix of Odense and a prestigious 1.50m-classe at Indoor Brabant. At the CSI5* in Paris Arezzo made his debut at 1.60m-level and immediately ended second. He was third in the Grand Prix at the KWPN Stallion Show, fifth in the Grand Prix of Maastricht and fifth in the Sires of the World in Lanaken. In addition he won a 1.40m-classe at Indoor Brabant, was second in the 1.50m and 1.45m in Humlikon, second in the 1.45m in Paris, fourth in the 1.45m in Oliva, fourth in the Queens Cup in Mechelen, fifth in the 1.55m in Basel, sixth in the 1.50m in Paris, sixth in the Grand Prix of Salland, seventh in the 1.50m of Odense, seventh in the 1.50m of Salzburg, eighth in the 1.50m of Basel, eighth in the 1.45m of Oliva, eighth in the 1.40m of Humlikon, eighth in the 1.40m of Zürich, ninth in the 1.45m of Salzburg, etc. Arezzo’s offspring are proving their breeding: this year again three of his sons were accepted for the KWPN Performance Test and Hilfiger VDL ended up third in the KWPN Champions’ Ring. Go Joed JR became Champion of the Open North Netherlands Championship loose jumping and Foxanne JR gained a score of 88.5 points in the IBOP and was sold for $150,000 in the WEF Sport Horse Auction. Emotion VDL has already been successful in several classes for young horses in Wellington and was one of the top sellers in the WEF Sport Horse Auction for a price of $175,000. As a four- and five- year old Enzo SL qualified for the final of the ISAH Cup. In 2013 Ilena VDL sold for Ä15,000 in the Star Sale Veulenveiling (Foal Auction) taking the title of the highest priced jumper foal. At the mare and foal shows Jalabart stood eighth in the final of the National Foal Show, Jefriede was reservechampion of the Provincial Foal Show of Groningen, and at the Provincial Mare Show of Flevoland the top three placings were Arezzo-offspring: Champion - Glinn, second - Gallenger and third - Gobolivia VDL. In 2012 Elrite JR was Champion three-year old mare at the Provincial Mare Show of Friesland, and Eline was Champion at the Provincial Mare Show of Flevoland. In the same year Hilfiger VDL was Champion of the jumper colts at the Provincial Foal Show of Friesland.
Jumping index: 162.
Arezzo: Top Bred, Top Jumper and Top Sire.