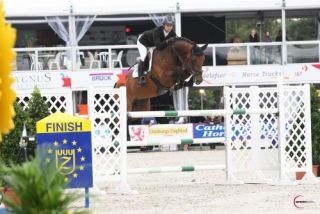 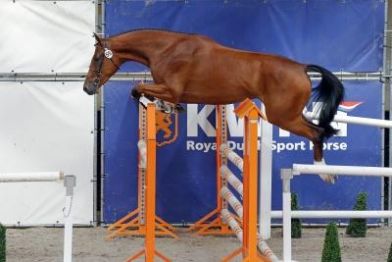 Baltic’s sire was the Grand Prix jumper, Quaprice, who unfortunately died just as he was making his mark on breeding. Quaprice was the son of the famous Quidam de Revel. The ‘Keur’ stallion Jus de Pomme (double Gold winner at the Atlanta Olympics) is sire to many Grand Prix jumpers. The line then continues with the proven sires Wellington, Orthos, Joost and Rigoletto. Baltic’s dam is the ‘Ster and Prestatie’ mare Nellandra. She is the dam of the approved stallion Vegas VDL and is a full sister of the Grand Prix jumper Mellandra. Baltic carries 55.66% thoroughbred. As a three-year old Baltic placed fourth in the Champions Ring at the Stallion Inspection in Den Bosch. During the Stallion Test, Baltic gave the top performance to become the Champion. He received a 9 for his reflexes, scope and talent as a jumping horse. Baltic continues to do well in sport developing impressively with his scope, good technique and great reflexes as he accumulates points. He jumped twice at the World Championships for Jumpers in Lanaken. In 2013 he placed 6th in the VION Cup for 7-year olds, 2nd in the 1.35m finals at NIC Assen and 5th in the 1.30m final at CSI Zuidbroek. He currently is jumping clear rounds at 1.40m level with James Billington. Baltic’s offspring are scoring very well at shows. Gyrusa H was sixth in the final of the Dutch Mare Championship and scored 82.5 points for the IBOP-test. Jacarusa H was fifth in the final of the Dutch Foal Championship. Gaviola scored 90 points for loose jumping at the mare inspection. Gidonia VDP became Champion of the Provincial Mare Show in Zuid-Holland and earned 88 points in the IBOP. In the final of the VSN Trophy fifth place was Gonzalez and seventh place was Granate. In 2013 two of his daughters were selected for the final of the Dutch Mare Championship and placed highly: Faviana?-?3rd and Fancy Roos VDL?-?4th. Fancy Roos VDL passed her IBOP with 88 points and Freya received a good score of 81 points. In 2013 Illinois was 8th in the final of the National Foal Show, Ilialtic wore the Championship ribbon for the jumper foals at the Provincial Show of Zeeland, Idylle was Reservechampion of the jumper foals at the Regional Show of Gelderland and Iwyruso was Reservechampion at the Regional Show of Groningen. At the Foal Show of Zangersheide, Bro for Fun Z placed 2nd in the colt class. Baltic has several approved sons. Graziano VDL ended up fourth in the Champions Ring of the KWPN Stallion Show and is approved by the KWPN. Fort Medoc VDL was fourth in the ISAH Cup for four years olds and is approved by Zangersheide. Goodluck VDL became the Champion of the AES Stallion Show in 2013. During the stallion show in Zweibrücken in 2013, a son of Baltic was approved and honored as best jumper of their stallion approvals.