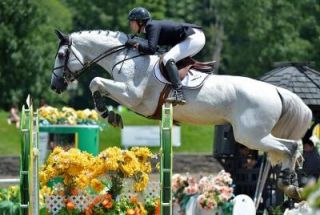 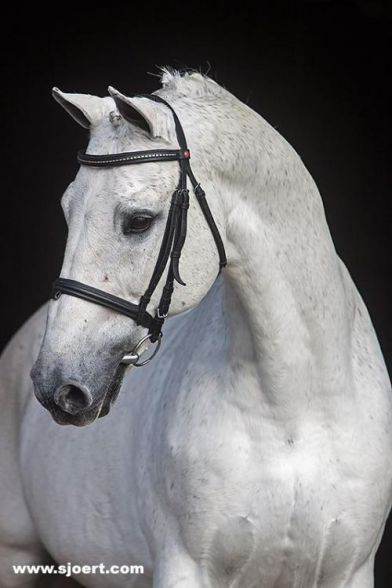 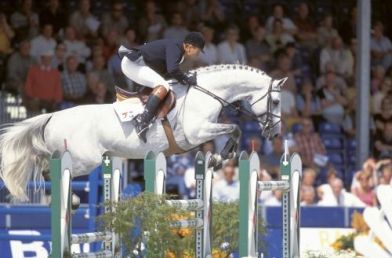 Corland is from the famous Holsteiner Line 104A, which goes directly back to Retsina who, herself, was a two time winner of the Hamburg Derby.
Corland had an impressive career under W.J. van der Schans placing, among others, in the following Grand Prix’s: 2nd in Rotterdam, 4th in Oslo and Den Bosch, 5th in Bordeaux and Maastricht, 6th in Helsinki, 7th in Zuidlaren, La Baule and Calgary. He also was Champion of the Benelux in The Hague, 7th in the World Cup of Verona and 2nd in The Sires of the World in Lanaken. At the European Championship, Corland proved to all that he belongs in the category of the best in the world. He won both qualifiers and had the best results of the Nation’s competition with the fastest clear round in the qualifying speed class. In the finals, he was 9th.
The number of Corland offspring that participate at international level and Grand Prix’s is very high. One of the most famous at this time is the mare Silvana. With her rider Kevin Staut, she is a solid member of the French team, winning the Silver medal at the World Championships in Kentucky and the European Championship of Madrid. In 2013 she excelled by winning the €?115.500 Gucci Grand Prix of Paris.
Bacardi VDL won with Jos Lansink Silver at the World Championships for 7-year old jumpers in Lanaken.
Successful Grand Prix horses that were highly placed in 2013 are: Apardi with D. Bluman, California with A. Thani Bin Khalid, VDL Torlando with C. Solem, Cortender with C. Solem, Absie with A. Ramsay, Sensation with S. Tepper, Fardon with N. Schurtenberger, Corjulana with G. Palmizi, Zorland with M. Neergaard, Whisper H.E. with S. Parot and World Wide with H. Wiering.
Other famous International jumpers are Carlanda II, HBC Dancing Queen, Marlo, Varios, Zarco, Rex G, VDL Rocksina, Parland, Pacific, Sir Corland, Snowland, Pracht S, VDL Santa Cruz, Stranger, Spring G, Pablo V, Selano, Top Gun, Sunsolde, Selma, Tomorrow, Vimaira, Von Dutch, Vernon G, Verona and more.
Alpha VDL was with $ 490.000 the topseller in the 2013 WEF Sporthorse Auction in America and he won the Ocala Grand Prix.
Gretel S became Champion of the 7-year old jumpers in Belgium.
Corland is sire of many ‘Ster, Keur and Elite’ awarded mares and has several approved sons.

Corland has proven by his own performance, and with that of his progeny, to be a treasure for the breeding community.