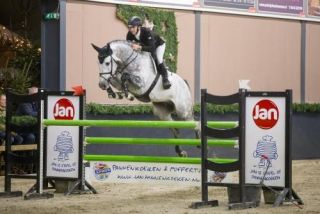 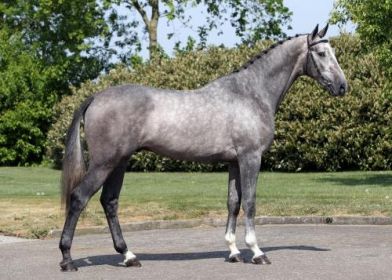 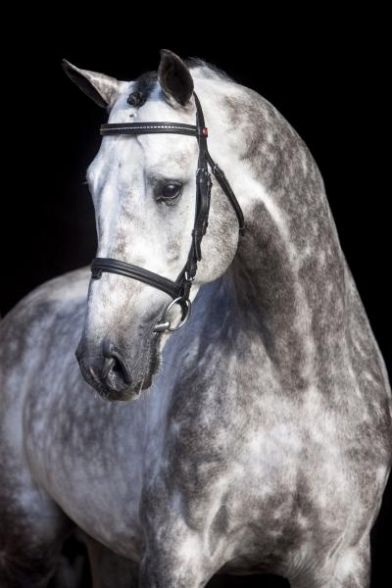 Dakar is a well-developed appealing grey stallion with a large and powerful canter that contributes to his notable scope. His sire, Cardento, jumped at the highest level and won Silver at the European Championship, the World Championship and at the Olympics in 2004. The legendary grandsire Nimmerdor was honored as ‘Stallion of the Century’. Continuing in his mare-line we come to the Grand Prix jumping stallion Silbersee, sire of Spender S and Calypso II, sire of world renowned Contender. In Dakar’s dam line we see a lot of quality. Mother Nisolde ‘keur’ was the 3-year old Champion of the Central Keuring of Groningen. She is also dam of the approved stallion Boss (Champion of the KWPN stallion inspections), Sunsolde (international jumper and Swedish Junior Champion) and Anisolde (Reserve Champion of the 5-year old jumping horses and jumped at 1.40m level). Granddam Isolde (also Champion of the CK Groningen) was designated ‘Keur, Preferent and Prestatie’ with the international offspring: Magnum, Candide and Alfalfa.

As a 3-year old, Dakar passed his performance test beautifully. He received an 8.5 for his great scope and an 8 for self-carriage, canter, ride ability, attitude and potential as jumping horse.
Dakar and James Billington are notable in the stallion competitions. As a 5-yr old stallion he jumped clear in Enschede, Roosendaal, Zuidbroek and in the final round at ’s Hertogenbosch. As a 6-yr old he was third at the stallion competition in Zuidbroek, jumped clear in Roosendaal and won the final and the competition in Den Bosch. He seems to have all the qualities for the higher and more complex courses. He shows a lot of scope, is fast, and has a great technique. At CSI Roosendaal Dakar made his international debut, where he jumped consistently clear rounds and was second in the final of the Youngster Tour. At CSI Asten and CSI De Wolden he jumped clear rounds and finished ninth in the finale of CSI De Wolden.
Dakar’s first offspring appear to be modern, long-legged and long-lined horses with a ground covering and engaged canter. They jump with scope, good technique and have the right mentality.
In 2013 Idaletta M was the Reserve Champion at the Dutch Foal Championship and was Champion at the Provincial Foal Show of Overijssel. At the Provincial Foal Show of Zuid-Holland Ippon VDJ was honored as the Champion foal. Icelos Eickenrode placed 3rd at the foal show of Terschuur. In 2012 son Holstein was honored as Champion of the jumper foals at the Provincial Foal Show of Flevoland.
At the Belgian Horse Auction his foal son, Nicardo was the topseller at €?20,000.
Expected breeding value: 156.
Dakar: Charisma and Scope.

02-22-2014 Topresults for James Billington at the CSI Roosendaal. With Dakar VDL he placed 2nd in the finals of the Youngster tour for ...
Read more

02-09-2014 During the KWPN Stallionapprovals also the finals of the  KWPN/KNHS stallioncompetition took place. There were some great results for the VDL stallions Etoulon VDL and Dakar VDL ...
Read more

Semen is sold for one mare only. If that mare is not in foal by 1st October, we need an official letter signed by your vet stating that the mare is not in foal. With this letter you can continue to breed for 50% of the stud fee in the following season. There is no refund of the stud fee. All stud fees shown in euros and are subject to UK VAT. The transport of the semen is at the risk of the receiver/mare owner. Chilled semen is limited when.
Copyright © 2021 B & W Equine Vets  |  All Rights Reserved
Equine Hospital
Breadstone
Berkeley
Gloucestershire
GL13 9HG