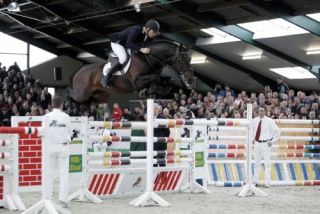 Douglas underwent his stallion test in Adelheidsdorf as a 3 year old, earning the 1st place in jumping with 139.49. Scores for the jumping portion were 10, 9.3, 9.3 and 9
As a 4-year old Douglas was the Champion of Ireland in his age group. At 5, 6 and 7 years old he was a finalist at the Irish Championships. When he was six, he was Irish Reserve Champion.
Douglas competed successfully in the international 1.40m and 1.50m classes with rider Conor Swail - 2nd and 4th in Dublin, 2nd in the B&R 1.40m Grand Prix, 3rd in the Dunlaoghaire 1.50m Grand Prix and 6th in the Rolestown 1.40m Grand Prix. Unfortunately, a serious injury ended Douglas’ sport career.
Offspring of Douglas are performing at the highest level. Suma’s Zorro participated at the World Equestrian Games in Normandy 2014, won the Grand Prix of San Giovanni in Marignano and was third in the Spruce Meadows Grand Prix. Dougie Douglas won the Grand Prix and Nations Cup of Odense in one weekend. The latter also won the Grand Prix of Chepstow, was second in the GP Vejer de la Frontera, third in the GP Millstreert and third in the Nations Cup of Gijon. Douglas Hill took second in the GP Vidauban and sixth in the GP Mullingar. The Pugilist ended up second in the GP of Lyon and sixth in the GP Madrid. Dundalk ended up seventh in the GP of Lier. Carneyhaugh Manx was three times second in the GPs of HITS on the Hudson Circuit in the United States and as a young horse he was Champion of the American East Coast League for seven and eight year old horses. Neat Krakatoa was seventh in the GP of Valkenswaard.
Other successful international show jumpers are: Abbervail Lightening, Abbervail Amber, Ardragh Grandslam, Be Be, Boleybawn Perfection, C’Est la Vie, Coral Springs, Curra River, Curra Glas, Darling HDH, Delano, Dirk HDH, Dollanstown, Evangeline, Fly With Me, Honeylands Douglason, Houpette, Mr. Rockefeller, Payday, Star Carrow Douglas, Rincoola Black Adder, Vinny Douglas, etc.
Douglas has several approved sons: Dallas VDL, D’Inzeo and Camillo VDL. As a five year old Camillo VDL became Irish Champion of his age and won the championship for five years olds in Dublin and was a finalist at the World Championship for six years old horses in Lanaken.
At auctions, Douglas offspring are sought after. In Wellington at the WEF Sport Horse Auction, Excel was sold for $150,000, Douplesse for $130,000 and Discovery for $145,000. In 2011, Colorado brought €340.000 the top seller of the Expo Talent Sale. At the Jumping Talent Sale Daddy Cool was sold for € 300.000.
Daughter Dolivia was Champion of the Open Friesian Championship for Free Jumping - 4-year old division and in 2011 she earned 85 points for her IBOP test.
At the National Free Jumping Championship 2010, the Douglas daughter Cirnanda, became the Dutch Champion. Daughter Classica VDL was 2nd in the Iron Springs Farm Cup for 5-year old jumpers at the KWPN-NA Inspections in the USA.
Thanks to the outstanding performances of his offspring Douglas received the predicate ‘Prestatie-Fok’ of the NRPS studbook.

Douglas meets the Sport, PROK and Roaring criteria of the KWPN.

Douglas: Passes on his own qualities and safeguards the valuable Darco genes.