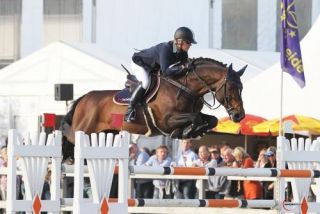 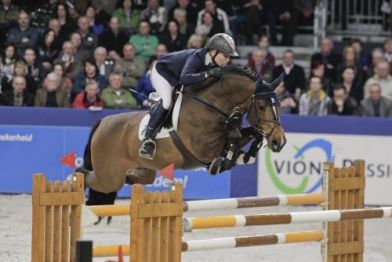 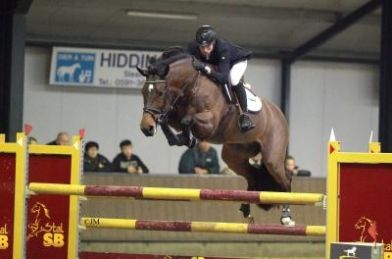 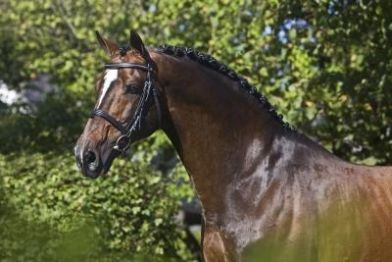 Harley’s pedigree is among the best for sport and breeding. His sire line contains three international jumping stallions in a row: Heartbreaker, Carthago and Caletto I.

Harley VDL jumps with willingness, take-off and technique. He had exemplary show results with Jessica Kuerten. At the KWPN stallion inspection in Den Bosch he handily won the VHO Trophy. Further he won international classes at La Coruna, Aalst and at Outdoor Gelderland. He placed 2nd in the Sainte Cecile Grand Prix and took 3rd place in the Neurenberg Grand Prix. As a 7-yr. old he was Champion of the stallion competition 1.30m/1.35m classes. His offspring jump with scope, are fast off the ground and having a very good technique.

His first offspring are competing with success at various international competitions. Earley became World Champion of the five years old show jumpers with Maikel van Mierlo in Lanaken and third in the ISAH Cup in Ermelo. Constable II won under Laura Kraut a class for seven years olds in Vilamoura and was second in Chantilly. He was sold in the Dutch Sport Horse Sales 2012 for Ä165.000. The topseller in this auction was son Cupido for Ä?200.000. Other notable offspring are: Carst VDL who won several classes as a 5- and 6 year old in Wellington, and was listed 1st in the USEF rankings for 5 year old jumpers; Barisme VDL, successful in the USA, was bought by the Dutch Show Jumpers foundation. Under Jesper Romp she will compete using the name Barista SFN. Hidalgo placed 6th in the Grand Prix of Verona. Arlando jumps at Grand Prix level and became second in the Nations Cup of Drammen. Bonjovina Vera won three classes for 7 year olds at Vidauban and Vilamoura and placed 3rd and 4th in 1.40m classes already. More successful international offspring are: Aapje, Baptista, Benedette, Casper, Carisma, Cerano, C. Hollinwood, El Dorado Hartago, Harmony, Harley, Harley David, etc.

Harley is awarded ‘Prestatie-Fok’ by the NRPS  and Keur by the KWPN thanks to the outstanding performances of his offspring in the international sport.

Harley has several approved sons, like Arlando, Everto, Healey Z and Harmony. During the ‘Goldener Herbst Korung’ in Zweibrücken a son of Harley was approved. Jurançon was purchased for Ä29.000 the most expensive jumper foal at the Borculo Foal Auction. Jacaranda D was third at the Provincial Foal Show of Limburg and Oscar A was Champion of the colts at the Foal Show in Antwerpen. Idana VDL was Champion at the Provincial Foal Show Friesland and Irisja was Champion at the foal show at Terschuur. In 2012, Hunter was Champion of the Young Foal Show at Tolbert and placed 9th in the finals at the Dutch Foal Championship .

Harley: A successful son of Heartbreaker.