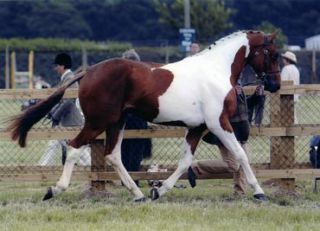 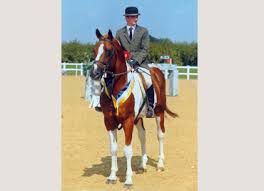 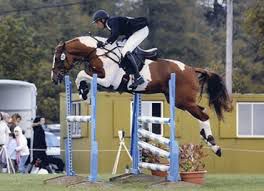 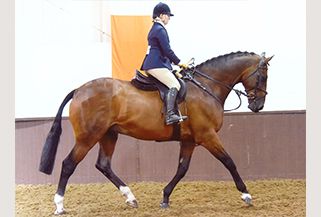 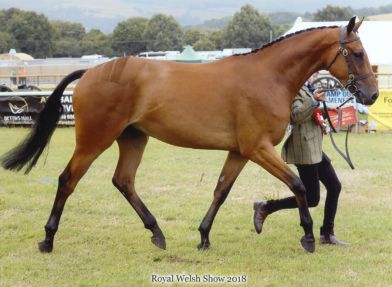 Brechfa Brynach is a stunning looking young stallion, with a wonderful temperament. As a 2 year old and a 3 year old he was In-hand Champion at County level in both Coloured and Sports Horse classes. His sire is the result of crossing two of the most influential jumping pedigrees and his dam was a high scoring BSJA competitor. His breeding shows in his straight movement; excellent show-jumping and natural cross country ability.

Brechfa Brynach resumed his showing career at the end of 2011.

Most of our brood mares have been home bred. Temperament is a key factor when brood mares are bought and is an important quality in the choice of stallions.

Our well-handled youngstock are kept in small herds on our mixed farm in Pembrokeshire. Living on varied terrain they become sure-footed, used to water, other animals, as well as farm machinery and traffic.

We consistently have a strong presence in the Show Ring, in a range of Sport’s Horse Classes, winning at County level; Qualifying for the Royal Internal and CHAPS Championship Shows; qualifying for HOYS; winning BSJA competitions; and eventing up to CC12* at Blenheim.

2015 was another amazing year both in the Show Ring and British Eventing. Three of our horses qualified for the 2016 R.I.

2016 started with Brechfa Brynach qualifying for the R.I. at Oakhampton and Champion of the R.I. classes. Brechfa Cai and Brechfa Cynog qualified for HOYS and we have again had a very good show and eventing year (see competing).

2017 was another very good year. Brechfa Brynach qualified for both the R.I. Non-traditional Ridden Coloured class and the Working Hunter class. See competing page to see how well our horses have done.

‘He was magical to ride – I could have sat on him all day – one of the best rides I have ever had. He is powerful, mannerly and a great galloper. He is a tremendous credit to his owner/breeder, his producer and his very capable rider.’

‘I judged each animal on its merits according to type. He was a nicely balanced horse that moved well and has a good gallop. He is a good type with a very nice temperament.’