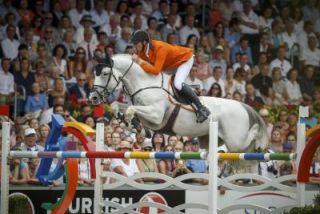 Zirocco Blue’s sire, Mr. Blue, was successful at the highest level of sport (Grand Prix and World Cups). Maternal grand sire of Zirocco Blue is the ‘Preferent’ stallion Voltaire, himself an international level jumper. Below Voltaire in the pedigree are the five best stallions of the Selle Francais studbook, whose offspring include Diamant de Semilly, Quidam de Revel, Alme, etc.

Zirroco Blue’s dam, Licorne des Forets, competed at the international 1.50 m level and his granddam, Gekas des Forets, not only competed at 1.40m level but was also the ‘most winning’ 6-year old in France. Great-granddam Rapsodie II also competed at 1.40m level and is full sister to the approved stallion and Grand Prix horse Stew Boy. This dam line has produced several approved stallions, national jumpers and international jumpers.

Thanks to his great performances Zirocco Blue is a member of the Olympic ‘Kader’ and the foundation Nederlands Olympiade Paard (N.O.P.) has secured him for the Olympic Games in Rio de Janeiro 2016. Now Zirocco Blue carries the letter N.O.P. in his name indicating this honored accomplishment.

Zirocco Blue’s first offspring made their debuts in the international young horse classes. Light Blue del Pietriccio won classes for six year olds in Arezzo, Ella Sandra G won the five year olds in Mijas, and Dorludine won the six year old in Manerbio. Dirocco B handily won classes at WEF Wellington and Delvecchio won, as a five year old, three classes in Vilamoura As a six year old he placed several times. Dior and Donjo, also were placed in international young horse classes as five and six year olds. Blom’s Dora was third in the final of the Youngster Tour in Zuidwolde. In 2013 Dimitrie VDL took fifth in the final of the World Chamionships for five year olds and Ever Blue ended up fourth in the VION Cup for four year olds.

His foals are doing well. Jayden became Champion of Provincial Foal Show of Brabant and ended up 13th in the final of the National Foal Championship. Julio became Champion in Harich and several foals were reserve Champion of their region: Jacrco MP of Overijssel, Jekita K of Zuid-Holland, Jolly Blue of Zeeland and J of Limburg. In 2013 Ilavsca-Deux Fortuna placed fourth, Isurusa ninth and Iwanho Kt eleventh in the final of the Dutch Foal Chamionship. Gracia was Champion of the three year old mares in Noord-Brabant and Geniene was reserve Champion of Zeeland.

Geisha M and Emy Arwena both received 80 points in the EPTM test. Gurusa scored 81 points in the IBOP. Ely VDL was the top scorer in the IBOP of 2012 with 89 points. Grapjas ended up fourth in the final of the VSN Trophy.

Zirocco Blue: Does it both - Sport and Breeding!