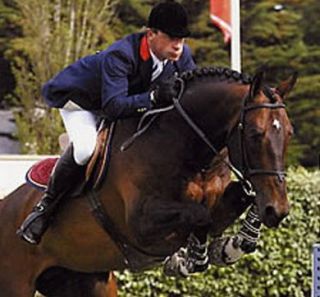 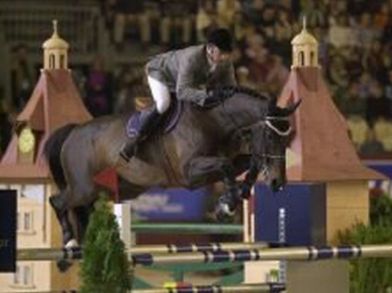 Carrying blood from all the important jumping breeds of Europe. Voltaire, Furioso, Nimmerdor, Gotthard, Farn, Le Mexico, all great progenitors of modern jumper breeding. Kannan is clearly a product of his genes.

A tall rangey Stallion, Kannan brings power, movement and scope. He is also noted for his style, balance, temperament and good mouth. He is incredibly fertile.

Kannan's competition successes have included winning the Belgian Classic Circuit at the age of 6 in 1998, becoming 7 year old Belgian Champion in 1999. In 2000 he made his International debut by finishing 5th in a Grand Prix. In 2003 Kannan won the Deauville Grand Prix and In 2004 Kannan won at Paris Bercy and Jardy as well as many other competition successes. He was a regular member of the French team which won the Samsung Super League in 2003 & 2004. In 2005 he became French National Champion.

Like their father, his offspring exhibit style and balance at the jump, along with a good mouth and character

His most important products are Bridget, who recently won the bronze medal at the 2011 Pan-American Games, the sadly deceased A Pikachu de Muze, who won the six year old World Championships at Lanaken in 2006. The same horse was subsequently sold at the PSI auction for 570,000€. In 2006 he also produced the American 6YO Champion Amis de Kannan.

Other than this, he has 217 products jumping at international level (2* and above). His production is still young, however he is proving very effective in the young horse classes. He has been either 1st or 2nd in the French sires list for four consecutive years.

Of the 49 products which have put Kannan as the #5 stallion in the World, the average age is only 9. We now firmly believe that Kannan will be the World #1 sire in his lifetime.

Mares to use with this stallion:

Because of his size and strength, he is well suited to small to medium weight mares, who lack size, scope and power. His nature, character and mouth can be used on most mares. Heavy and plain mares should be avoided.