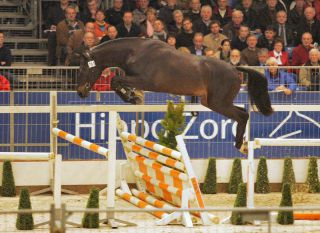 Waldo Van Dungenhas a unique pedigree that combines some of the most famous pedigrees in the world. His sire Tolano Van't Reithofis by the famous Chin Chin.

His dam Okra is by Concorde, who is a renowned sire of show jumpers and approved stallions. Waldo's Grand Dam RAGNA II is by Polydorand then goes back to the famous sire Ramiro.Okra's full brother is Eurocommerce Seattle  who has won numerous 1.60m level competitions, with Dutch rider Gerco Schroder.

Waldo has  shown his super jumping ability over fences, when he received top marks for his jumping in S’Hertogenbosch Stallion show in February ‘06. He showed tremendous scope and carefulness over a fence, with a fantastic temperament. Waldo started his career with a placing in the 4 year old class in Cavan show. His powerful jump over a fence has everyone talking! He competed in Europe in 2009 and had several placings in the International 6 year olds in Moorsele, Belgium and numerous other shows in Netherlands when he was stationed at Team Nijof.

Waldo is the sire of Arena UK Winston who with Ellen WhitakerL is showing all the attributes to be a Grand Prix horse, like his sire he has unlimited scope, with paces and temperament to match

Waldo has been competing regularly at international level, with many results at 1.40 - 1.45 level

Combining his pedigree, attitude and raw jumping talent, this stallion possesses all the great attributes to be a winner and to breed a winner!