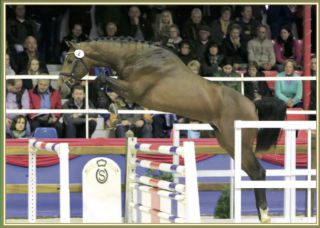 Top show jumping capital with international background and in a class of his own for style and disposition. Action Blue presents himself with balance and conviction at the jump, showing plenty of scope and great leg technique and bascule. He demonstrated his capacities impressively at his 30 days test in Schlieckau: His jumping qualities were valued with 10.0 and 9.5. His sire Action Breaker is, at present, ranked as one of the best show jumping stallions worldwide. He was ridden successfully by Sergio Alvarez Moya (ESP) at the World Equestrian Games in Kentucky in 2010 and in the Grand Prix of Aachen he finished third. His dam-sire Chacco-Blue was two times placed amongst the best at the German national championship finals and went on to win international Grand Prix, for example in Neumünster 2012. In the Grand Prix of Aachen, he finished in third place and is now among the top ten internationally successful fathers according to the 2015 WBSFH ranking.
Chacco-Blue sired more than 36 licensed sons and 260 advanced level/S level show jumpers, who have so far won more than two million euros and placed their father in eighth place in the 2016 WBFSH world ranking
The established son of Landadel, Landor S in the third generation, was champion of the six-year-old show jumpers at the Bundeschampionship in 1997 and was successful at advanced level/S level. Grandeur, three times winner of the show jumping Derby and in his time the most successful show jumping stallion worldwide, Pilot, the Westphalian legendary sire and Rasso, the Bavarian show jumping ´primary rock`, round off this famous pedigree. The multi-branched dam-line produced 51 licensed sons, among them Carlando I and II (PB/privately owned stallions Bavaria), D’Artagnan Classic (Ldg./stud  Schwaiganger, licensed champion), Dobrock (Ldb. Celle/Celle stud), Donatelli I (privately owned stallion Oldbg., USA), Donatelli II (Ldb./stud Dillenburg), Grandus (Ldb./stud Zweibrücken), Picard (Ldb./stud Celle, licensed champion), Placido (PB/privately owned stallion, Oldbg., Holst.), San Salvador (Ldb./stud Marbach),and the internationally successful show jumpers Garlic/Heinrich-Wilhelm Johannsmann, Prestige/Franke Sloothaak, Stella 153/Meredith Michaels-Beerbaum and the successful dressage horse Blind Date 25/Victoria Max-Theurer.

This horse is WFFS positive.