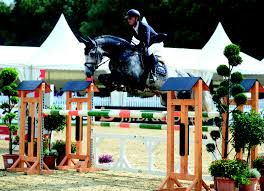 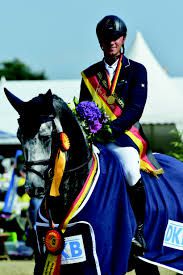 With a start-to-finish victory, as rarely seen before, Caroly was the National Champion of German show-jumping horses in 2014 with Bastian Freese. After having won show-jumping classes almost one after the other, he won both qualifiers in Warendorf, and also the final with superior ease. Rideability, canter and jumping technique are without exception orientated towards the very best. His sire Calido I is at present one of the most important sires in Germany. Exceptional offspring are, amongst others, Coupe de Coeur, German Champion 2006 and 2007 with Rene Tebbel, Nobless M, Grand-Prix winner 2007 in Helsinki and La Coruna with Pius Schwizer and Eurocommerce Acapulco with Gerco Schröder. 71 Calido I-sons have been licensed and 293 of his descendants have scored successes in S level show-jumping. His dam Cora produced with Corde Dacora (by Carrico) another licensed son, who has already won show-jumping classes, and with Starfighter (by Stalypso) an international S level winner. The dam sire Contendro I has already earned the status of "trademark stallion". The stallion performance test winner accounts for 66 licensed sons, including the international show-jumping OS champion stallion and stallion performance test reserve champion Charming Boy, the German National Champion Captain Fire and Codex One (international success with Christian Ahlmann). With the Pilot-son Peter Pan as well as Pik König, Graphit, Gotthard, Frustra II and Dominus, every further generation brings a high performer. From Caroly’s first coverings, his son Caro Gold was licensed in 2016.