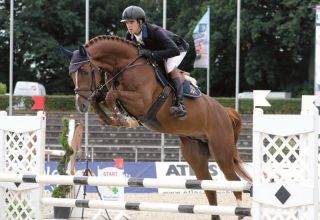 Chacfly is our special debutant of the 2017 breeding season: With the impressive and unprecedented final score of 9,49, this elegant, athletically built chestnut finished his 50-day-test in Adelheidsdorf in November 2015. For six individual criteria, the maximum mark of 10 was given. His rideability was consistently marked with 9,5 from the judges and the test rider. Before that, Chacfly was several times victorious in show-jumping classes.
His incredible capacities on courses are clearly sketched out with the extraordinary performance pedigree: The sire Chacco-Blue, in the meantime sire of many internationally successful show jumping horses, was victorious in international Grand Prix’s, among others in Neumünster 2012 the third place in Aachen, before leaving the scene far too early. Chacco-Blue sired more than 30 licensed sons and 183 advanced level/S level show jumpers, who have so far won more than 1,31 million eurosand placed their father in eighth place in the 2016 WBFSH world ranking.