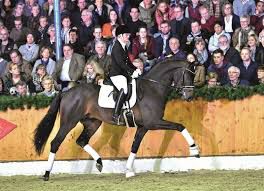 A sovereign for the big dressage arena

Feinrich was the glowing winner of the 25th Mecklenburg licensing days 2015 in Redefin. With a unique character, a fantastic temperament and extraordinarily high quality places, this wonderfully built model athlete amazes in his daily work and gives grounds for high hopes. In 2016, he passed his 14-day-test in Schlieckau with flying colours and finished in the leading group.

With his unusual breeding, Feinrich is very special. His sire Fürst Heinrich was the champion stallion of his 30-day-test in 2001, main premium winner of the 2002 Oldenburg licensing, World Champion of the five-year-old dressage horses in 2003 in Verden and produced 53 licensed stallions and over 100 state premium mares. With Van the Man and Fürstenball, he has produced two Oldenburg champion stallions and with Fürst Romancier, an absolute elite stallion. The dam, elite mare Gesina, produced with For Romance I (licensing champion 2011, main premium winner 2013) and For Romance II (premium stallion 2015) another two licensed stallions and their full sister St. Pr. St. Fasine, champion mare of the elite mare show, and, in 2015, German national champion of the six-year-old dressage horses and PSI record price.

Dominant genetic with a modern look!