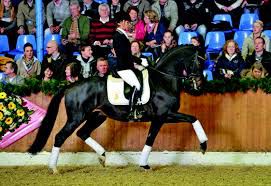 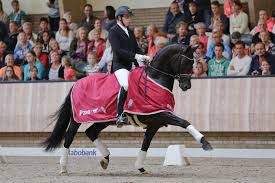 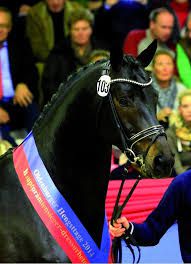 Main premium winner and foal-maker No. 1!
Grey Flanell combines a brilliant type and a lot of masculine flair with three exceptionally good paces. He seems to have been born with a high amount of collection. Grey Flanell's first offspring immediately dominated numerous foal shows and auctions. His extremely charismatic and well moving progeny were awarded premiums in remarkably high numbers and were sold for top prices at auctions. In 2014, the average price for a Grey Flanell foal at the Oldenburg Elite Auction in Vechta was around 20.000 euros. At the foal auctions of the Schockemöhle breeding station, he also produced top foals and highly paid candidates. That is why in 2014, he was the undisputed champion stallion of the main premium during the Oldenburg Stallion Days in Vechta. Once again, in 2015, he produced the top prices of the foal auction in Vechta with bargain prices of 65.000 and 60.000 euros.
At the end of 2013, Grey Flanell passed his 30-day test in Schlieckau with strong emphasis on dressage. He won level A dressage horse classes, was highly placed in L level classes and was, in 2014, the best four-year-old stallion at the Pavo Cup in the Netherlands (comparable to the national championships).
Here, international genetics have made an absolutely amazing disposition for dressage. The sire Gribaldi was champion stallion at the Trakehner stallion licensing in 1995 and internationally successful with Edward Gal. In 2008, he was Trakehner stallion of the year. Primarily in KWPN breeding he sired top horses such as the World Cup winner Painted Black/Anky van Grunsven, the Grand Prix winner Sisther de Jeu/Edward Gal, Peter Pan/Beatriz Ferrer-Salat, Pasternak/Coby van Baalen, Girasol/Nadine Capellmann, Zardin Firfod/Patrik Kittel and of course, the record stallion Totilas. In 2014, he was the best dressage sire of the WBFSH world ranking. Dam sire Clavecimbel was successful in Grand Prix and sired, amongst others, the known sire Havidoff, who was also internationally successful in dressage. The grand dam Janoeska was successful at advanced level/S level show jumping and the great grand dam Zanoeska was successful in both dressage and show jumping up to advanced level/S level. In the third generation comes the significant Ferro, who can be seen as one of the most successful dressage stallions in sport of all time, having won the Silver Medal at the Olympic Games, as well as World Equestrian Games and European Championships. Then comes the Holstein stallion Farn, who made history, especially in the Netherlands with his outstanding son Nimmerdor and with numerous international sport horses. The pedigree is rounded off with the Trakehner Dorunto who evolved in the Netherlands into a world-class producer, having sired, amongst others, Ideaal/Johann Hinnemann and several Olympic dressage horses.