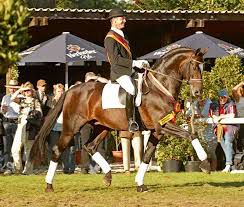 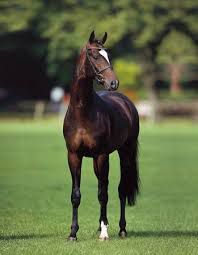 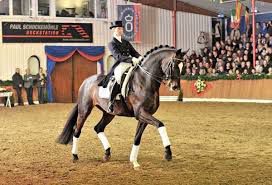 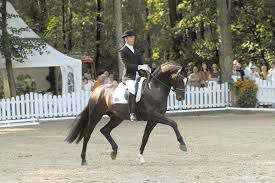 Sire of World Champions, Winners of the German national championships, price record setters and licensing champions
Hero and producer of champions of historic uniqueness. If one wanted to put together all the heredity highlights for Sir Donnerhall I, one would need to write a whole book. For years, he has dominated the German championships as no sire has done before him: In 2015, his son Smirnoff won the German championships of five-year-old dressage horses. In 2014, his daughter Special Diva OLD won the German championships of three-year-old mares and geldings and his licensed son Sir Heinrich dominated the six-year-old dressage horse class. In 2013, his daughter Cindy OLD won the four-year-old mare and gelding class, his licensed sons Sir Heinrich OLD and Sean Connery I were respectively Vice German champions of the five and six-year-old dressage horses. In 2012, Sir Heinrich was the Oldenburg regional champion and vice German champion of four-year-old stallions and Stanford won the bronze medal in Warendorf in the three-year-old stallion class. In 2014, Cindy OLD won the title of Oldenburg dressage champion and Stanford scored points in 2014 and 2015 as high finalist at the World Championships of five-year-old dressage horses. In 2012, his son Sa Coeur was also World Champion of five-year-old dressage horses and star horse of the PSI auction in Ankum with a knockdown price of 2.31 million euros. Sir Donnerhall's offspring have always been sought-after: A foal was sold for 60.000 euros at the AOS auction and in the 2011 PSI auction collection, there were seven descendants of Sir Donnerhall I, where Sir Caramello and Siebenstein were both sold for 500.000 euros and South Coast for 520.000 euros. The youngest PSI Highlight was Sean Connery II, sold for 850.000 euros in 2015. The special highlight of 2016 was the champion mare of the Oldenburg Elite Mare Show, Candy OLD, who is the full-sister to Cindy OLD and Sir Heinrich OLD. Sir Heinrich OLD became VTV dressage stallion of the year in Vechta. His licensed son Sir Olli OLD was third at the World Championships of six-year-old dressage horses in Ermelo (NED) and was, with the knockdown price of 370.000 euros, the most expensive auction horse in Vechta. So far 104 descendants have been successful in dressage at S level – a totally unique result.
For years Sir Donnerhall I was one of the most successful sires of auction horses and continuous producer of top horses achieving 6 digit prices. His progeny impress repeatedly with their great style, modern type and subtle movements. The FN breeding valuation ranks Sir Donnerhall I, who has himself been trained up to Grand Prix, as one of the best sires of dressage horses (150 points and 99% reliability for youngsters, 135 points and 97% reliability for sport competitions). He was second reserve champion of his licensing, stallion performance test winner, Ia main premium sire in 2005 and in 2006 German national champion as well as vice World Champion of five-year-old dressage horses. He quickly turned out to be a foundation stallion: He has already produced 94 licensed sons, including the NRW champion stallion and national German champion Silbermond, the champion stallions of the South German licensing Sir Nymphenburg I and Sir Schiwago as well as numerous premium stallions at every German licensing. The premium sire Santo Dottore was Champion of the Riding Horse three-year-old Oldenburg stallions in 2014. 154 daughters were awarded the predicate "state premium". The daughter Assandra was honoured as best three-year-old mare in Austria in 2011.

Sir Donnerhall I: A safe bet - Guarantor of noblesse and rideability